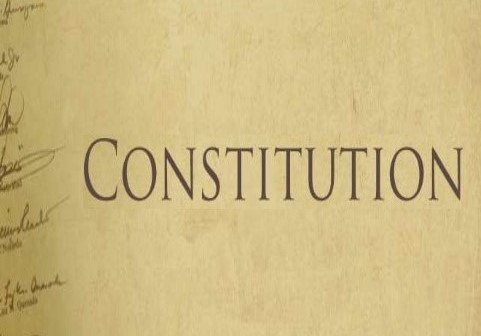 The lecture was provided online, since before the dissemination event there had been another special online meeting dedicated to the PhD students who expressed their preference for the online meeting in the afternoon. The information about the lecture, followed by a discussion and the opportunity to publish students´ articles upon an intersection of their dissertation papers with the material core of the Slovak Republic was subsequently provided not only for PhD students of the Faculty of Law of the Pan European University but for the students of all law faculties of Slovak and Czech universities (particularly per email communication).

Despite that only around 10 students and members of the teaching staff were present at the lecture that it was given on 14 June 2021 expressly on the topic Material Core of the Constitution in the Application Practice.

After some technical issues and opening words of the Dean Katarína Šmigová, assistant professor Dr. Boris Balog was given the floor. Immediately at the beginning, he pointed out that the choice of the topic was influenced by the fact that the construction of the material core of the Constitution, which is interesting in itself and has a huge, wide theoretical scope of research, has gone through a very interested journey in the Slovak Republic and in the constitutional development of the Slovak Republic since its establishment in 1993.  It has been talked into by what historical events we have survived since then and how these events have been signed under the formation of the constitutional system of the Slovak Republic, how they have been signed under the way how these events were constitutionally resolved. Today we can look at some of the events of the nineties at a distance of a huge time of more than one generation.

The whole process started because of so-called Mečiar´s amnesties in 1998 for a thwarted referendum and the kidnapping of the president´s son, Mr. Kováč. These were events that traumatized the whole society and influenced the constitutional development by trying to answer whether it was possible to revoke them in a constitutional way. Political and academic discussions have concerned the principle of separation of powers and the status of the National Council and its authority to adopt any norm it considers necessary.

It was the principle of separation of powers that had to be interpreted in 2006 and consequently in 2014 because one executive body, the National Security Office, was authorised to decide within a process of nomination of judges that was considered unconstitutional by the Constitutional Court. Nevertheless, as a reaction, the National Council adopted a constitutional act to overcome the limits of the content. Similarly, in 2014, even by a certain trade among political parties, another constitutional act was adopted to use the form as a mantle to cover the content that had been declared unconstitutional because of the principle of separation of powers.

It was in 2017 that the Constitution of the Slovak Republic was amended, and the National Council was expressly authorised to adopt a resolution according to which it could revoke amnesties granted by the deputy president under a condition of a constitutional analysis by the Constitutional Court. It was in its decision that the material core, although only in an implicit form, had been developed by the Constitutional Court and identified in the principles of a democratic state and the rule of law, such as principle of freedom, equality, human dignity, human rights and fundamental freedoms, sovereignty, legal certainty, separation of powers, democratic legitimacy, etc.

The lecture was followed by a discussion about the amendment of the Constitution that allowed the extradition of its own citizens and the methodology of identification of principles of a democratic state and the rule of law. Moreover, the international legal obligations were presented as well as another option that could be used by the Constitutional Court to address the issue of constitutionality. Finally, other constitutional experience was presented (e.g. Italy, Germany), and different institutional culture and paralegal factors that might influence the development of a constitutional system were discussed.

The lecture and the following discussion were the introductory event of the planned meetings of PhD students upon different matters are challenging to society and its legal system in different countries.